It’s amazing how much tolerance the left has for the intolerant when it’s one of their own.

Take Cynthia McKinney, a former Democratic congresswoman from Georgia and the Green Party’s 2008 presidential candidate. In 2009, the Southern Poverty Law Center — which usually spends its time attacking conservatives — reported that McKinney was “now flirting with anti-Semites.”

What did that “flirting” entail? McKinney went to a conference in London sponsored by former Malaysian Prime Minister Mahathir Mohamad, whom she called “one of my heroes.”

Mohamad has a long history of virulent anti-Semitism. The SPLC saw fit to include quotes of his like “Jewish stinginess and financial wizardry gained them financial control of Europe” and “the Jews rule the world by proxy. They get others to fight and die for them. They invented socialism, communism, human rights and democracy to avoid persecution and gain … control of the most powerful countries.”

At that conference, she met with David Pidcock, a British-born convert to Islam whom she called “my London friend.” According to the SPLC, Pidcock is a conspiracy theorist who blames the world’s problems on a cabal of shadowy forces that includes (inter alia) “Luciferian Zionists” and who featured Henry Ford’s anti-Semitic tract “The International Jew” on his website.

She was photographed with Pidcock and Michele Renouf, a leading British Holocaust denier, the SPLC reported. In another commentary that she posted on the Green Party website, according to SPLC, she praised the most recent book of another anti-Semite and Mahathir adviser, Matthias Chang, called “The Shadow Money-Lenders.” (The title alone serves as summary judgment.)

Even if this were the only evidence McKinney associated with anti-Semites, it’s not just a flirtation, it’s a consummation and several years of blissful marriage to follow.

This wasn’t the only evidence she was a bigot, you might not be surprised to learn — and the SPLC was being far too kind to McKinney, who represented Georgia in the House of Representatives from 1993 until 2003 and then from 2005 to 2007. And McKinney’s relationship with anti-Semitism remains strong to this day, as McKinney proved with a Twitter post on Monday.

The tweet appeared to have been deleted Tuesday, but was once again available for public viewing on Wednesday. 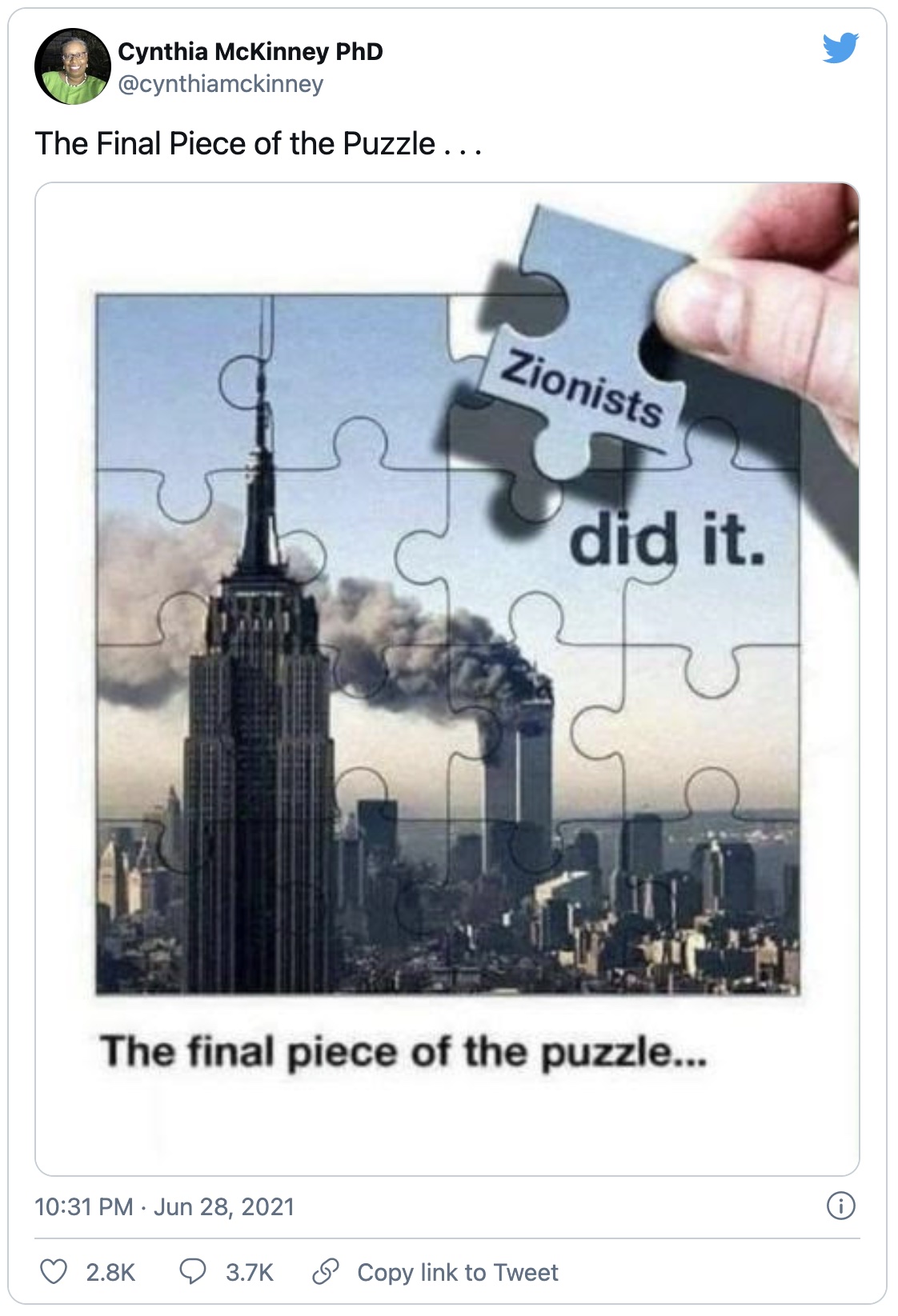 Apparently, apropos of nothing in particular, McKinney felt the need to inform us that “Zionists did it” was “The Final Piece of the Puzzle” surrounding 9/11.

This managed to unite, however briefly, both the left and the right on Twitter in condemnation of McKinney. First, here are conservative pundits Ben Shapiro and Rita Panahi, along with Parkland shooting survivor and gun-rights activist Kyle Kashuv:

I look forward to her honorary membership to the Squad https://t.co/Xspm61Irol

This is grotesquely antisemitic at a time when antisemitic hate crimes are surging around the world.

At a time when antisemitic hate is increasing nationwide & solidarity has never been more important, this is what we’re not going to do.

Wow. “Let’s blame it on the Jews” taken to a new low. Disgusting.

I’m glad we’re all on the same page now, but it’s still worth noting how long McKinney was enabled by both the Democratic Party and the left wing. It’s also worth noting that once her anti-Semitism became too blatant to ignore, few on the left disavowed her. Most everyone else simply stopped acknowledging she existed.

Our saga begins in 1996, four years after McKinney was first elected to Congress. Her father — Billy McKinney, a Georgia state representative and her longtime political adviser — called his daughter’s opponent that year “a racist Jew” on several occasions.

According to a 1996 report in The New York Times, this was after her challenger, John Mitnick, drew attention to then-Rep. McKinney’s support for Nation of Islam leader Louis Farrakhan, an association that’s so seldom a good sign when weighing someone’s history of anti-Semitic behavior.

McKinney, at first, refused to disavow her father’s remarks, with a media consultant for her campaign saying, according to The Times, that “this is just one of those times when Billy did something that Cynthia is very upset about. There is a limit to which anybody can control Billbad cop.”

The Associated Press reported at the time that she had asked her father to issue a public apology.

Billy McKinney was at it again when Cynthia lost the 2002 Democratic primary for her seat: “Jews have bought everybody. Jews. J-E-W-S,” he said, according to a 2020 report in the Atlanta Jewish Times.

And yet, there are still stretches of highway in Georgia named for both Cynthia McKinney and her father; a 2007 attempt to have both renamed failed in the Georgia General Assembly, as the Jewish Times reported.

McKinney would win the 2004 Democratic primary and get her seat back even though she was just as problematic as ever. Here’s how Edward Alexander, an academic specialist in Jewish studies at the University of Washington, described the victory in a contemporaneous opinion piece for the Seattle Times:

“Like many other inhabitants of the fever swamps of the Democratic Party, McKinney believed and said that President Bush knew in advance about the 9/11 plot but allowed it to proceed in order to line his pockets,” Alexander wrote.

“She also, as The New York Times said in reporting her victory, had made ‘a series of other incendiary, often racial comments.’ This is The New York Times’ delicate way of alluding to the stridently anti-Semitic character of McKinney’s 2002 campaign, in which ‘Jews’ were repeatedly blamed for her faltering in the polls and for her eventual defeat. Her behavior did not deter House Democratic Leader Nancy Pelosi, then the Democratic whip, from backing her to the hilt.”

In 2006, McKinney lost her seat again after faltering in the primary, this time after an altercation with the Capitol Police. In 2009, according to a Fox News report from the time,  she was detained by Israeli authorities aboard a boat that attempted to break an Israeli blockade of Gaza. She’d been on a boat on the same mission in 2008, according to Fox.

In 2009, the Anti-Defamation League noted that “McKinney has a history of using anti-Israel rhetoric, including accusing the pro-Israel lobby of sabotaging her political career and alleging that Israel of committing genocide, apartheid and war crimes. She has repeatedly condemned U.S. support for Israel.”

Since then, she’s lent her support to the “Dancing Israelis” conspiracy theory, which asserts that “five dancing Israelis” were arrested as they danced while the Twin Towers burned, presumably after they directed a successful false-flag attack.

In 2016, she tweeted about this in regards to a different conspiracy theory, this one claiming the Israelis were responsible for terror attacks in Nice, France, and Munich, Germany, because a photographer married to an Israeli was at the scene of both attacks, according to the Jewish publication The Forward.

“Same Israeli photographer captures Nice and Munich tragedies. How likely is that? Remember the Dancing Israelis?…” McKinney wrote in the Twitter post.

All I have to say is that if she doesn’t stop all this shameless “flirtation” with anti-Semitism, the SPLC might start thinking she actually means it.

At no point has the left felt the need to strenuously denounce McKinney en masse. For the most part, progressives pretend she’s a distant relative long ago placed in a nursing home and forgotten. That attitude is emblematic of a larger problem: The fact there are plenty of other Cynthia McKinneys active in the Democratic ranks that the party is similarly unwilling to disavow.

Reps. Ilhan Omar and Rashida Tlaib easily come to mind, but it’s not just them. Here’s another Democrat speaking about Israeli settlers at an event put on by the U.S. Campaign to End the Israeli Occupation in 2016, according to the Washington Free Beacon:

“There has been a steady [stream], almost like termites can get into a residence and eat before you know that you’ve been eaten up and you fall in on yourself, there has been settlement activity that has marched forward with impunity and at an ever increasing rate to the point where it has become alarming … We’ve gotten to the point where the thought of a Palestinian homeland gets further and further removed from reality.”

It’s a formulation that would be familiar to any fan of the anti-Semitic Louis Farrakhan.

That’s how deep the rot goes: They just replaced one anti-Semite with another.

'We’re also working to restore good social studies standards that teach the history of the ideals of the institutions of liberty.'
By Randy DeSoto  July 1, 2022

Farmers Rise Up, Block Highways with Their Tractors in Protest of Climate Tyranny

The government claims that its crackdown on farmers amid a global food crisis is an 'unavoidable transition' to improve the environment.
By Andrew Jose, The Western Journal  July 1, 2022

'The issue is, these aren’t just any recalls: These are serious and, most worryingly, basic problems - an engine combusting, a tire rolling off.'
By Jack Davis, The Western Journal  July 1, 2022

Judge Reprimanded for Verbal Tirade in Court: 'I Asked You A F***ing Question'

A Florida judge is facing a suspension from the bench stemming from two incidents of verbal abuse in his courtroom.
By Richard Moorhead, The Western Journal  July 1, 2022

'Let us be candid. Our job is not to be liked, nor is it to be concerned about whether or not you like what we ask.'
By Jack Davis, The Western Journal  July 1, 2022

'Your administration’s announced action is completely discretionary. Thus, you have the power to stop it,' Texas Gov. Greg Abbott told Biden.
By Elizabeth Stauffer, The Western Journal  July 1, 2022

A mom who saved her children on the day of the Uvalde school shooting in May says police are harassing her.
By Jack Davis, The Western Journal  July 1, 2022

Fox News Digital just released a report regarding the truth about gun violence. But the left still won't 'follow the science.'
By Ole Braatelien, The Western Journal  June 30, 2022

Priceless Trump Interview: It Would Be Nuts to Attack Secret Service - 'These Guys Lift 350 lbs! I Don't!'

Former President Donald Trump is mocking the claim he tried to fight Secret Service agents for control of his presidential SUV.
By Jack Davis, The Western Journal  June 30, 2022

President Joe Biden said on Thursday that gas prices will remain high until Russia ends its war in Ukraine.
By Jack Davis, The Western Journal  June 30, 2022
Next