The Daily Beast, for the unaware, takes its name from the sensationalistic, fact-challenged London tabloid in Evelyn Waugh’s classic novel “Scoop.”

“News is what a chap who doesn’t care much about anything wants to read,” a veteran journalist tells a newcomer to the fictional Beast in the most-repeated quote from the 1938 journalism satire. One assumed when the leftist digital publication christened itself after the tabloid, it was being playful about the matter.

Apparently, though, the name presciently foretold the quality of its Trump-era reportage. If presumptive President-elect Joe Biden takes office on Jan. 20 as the next president, therefore, The Beast’s Tuesday story about the death of South Dakota GOP Gov. Kristi Noem’s grandmother should serve as a fitting farewell to this epoch in the outlet’s history.

By way of context, Noem has been pilloried by the establishment media since the coronavirus crisis began for refusing to either lock down or issue a statewide mask order. Whatever the efficacy of mask mandates or stay-at-home policies may be, the attempts to link Noem’s policies to COVID-related suffering has led to some cringeworthy overreaches. Most notably, when President Donald Trump held his Independence Day event at Mount Rushmore in South Dakota, the media foregrounded Noem’s refusal to insist on face coverings and branded the shindig a super-spreader event.

When no spread (super or not) could be traced back to the event, the matter was quietly dropped.

But the cause endures and the narrative shall never die. On Nov. 22, Noem lost her 98-year-old grandmother, Aldys Arnold. This would only merit coverage for one reason — and, judging by The Beast’s headline, that’s the reason the outlet was reporting on it: 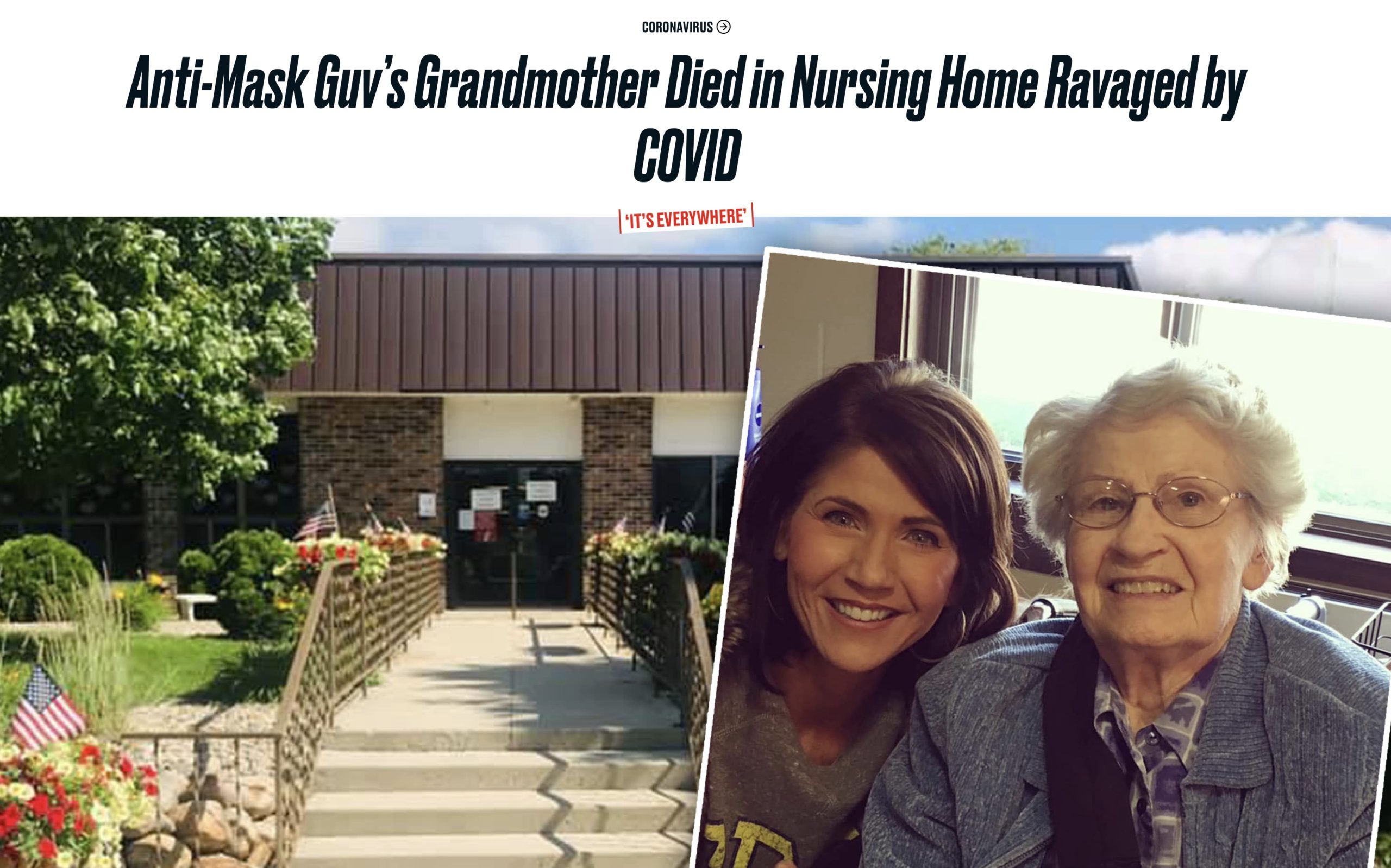 “Headless Body in Topless Bar” it’s not, but it does the job. It ties Noem’s policies to her own grandmother’s death from COVID-19 at the Estelline Nursing Home, about an hour’s drive north of Sioux Falls.

Daily Beast writer Michael Daly talked to the administrator of the home, who said COVID had been “devastating.” Daly also spoke to the family of another Estelline Nursing Home resident who died of COVID on the same day Noem’s grandmother died, a woman Daly wrote “was just the sort of person a governor of whatever politics should eulogize.”

The article tacitly accused Noem of heartlessness, pointing out she tweeted about Small Business Saturday as two more people died of the novel coronavirus at Estelline.

“None of this is to say that Noem is at all cold-blooded when the lives include one of her own clan,” Daly wrote, noting the governor had “tweeted a moving tribute” to her grandmother. Apparently, if you want to balance business interests and personal responsibility in the time of COVID, you’d better be ready to don sackcloth over every death in your state, however — not just your grandmother’s.

Daly’s empurpled piece meandered on for more than 1,000 words. The vast majority came after he elided over this problematic fact in the second paragraph: Noem’s grandmother didn’t die of COVID-19.

Not that Daly believes this. He wrote that Arnold “is said by Noem’s office to have tested negative for the virus, though no cause of death was given. The other 12 of the 13 deaths between Nov. 14 and Nov. 28 at the Estelline Nursing Home are described by the administrator, Mike Ward, as ‘COVID-related.'”

If there was any evidence there’s some kind of conspiracy in Noem’s office to hide her own grandmother’s cause of death — something that’d make her the most politically radioactive person in America — Daly didn’t produce it, even though he spoke to the man who ran the nursing home in which Arnold died.

Instead, the evidence that a 98-year-old must have died of COVID seems to be that Estelline was a “top-rated nursing home” and that “all but two of the surviving 38 residents and at least 16 of the staff had tested positive.”

But, yes, the coronavirus apparently took a toll on the residents there — and as we know, The Daily Beast cares deeply about COVID policies that endanger those in nursing homes. 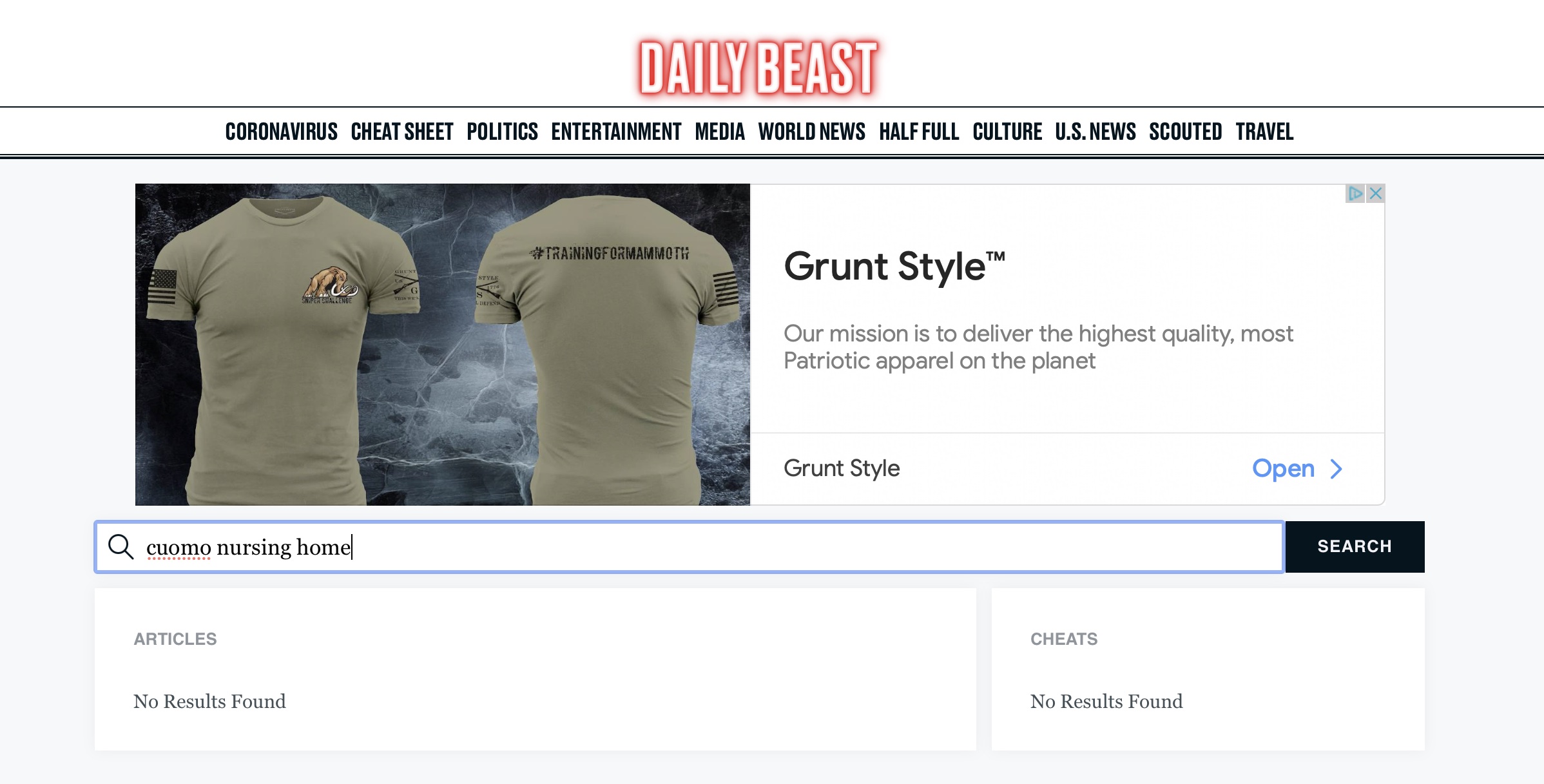 Just in case you want hard-hitting coverage on the Empire State governor’s handling of the pandemic, never fear. The Daily Beast has you covered: “Pierced or Not? The Mystery Over New York Governor Andrew Cuomo’s Nipples,” one representative headline from April read.

Am I being unfair to The Daily Beast’s coverage, given it’s an openly partisan publication? Perhaps, but no less fair than a writer who uses the death of Noem’s almost-centenarian grandmother from causes unrelated to COVID to condemn her for nursing home deaths related to COVID.

And it’s not just that the conceit behind the piece is terminally flawed, although that fact doesn’t help. Daly’s prose is so grimly self-parodying it seems like it would be more at home in a 2020 reboot of “Scoop” than in a serious attack on Noem.

Here’s a passage where he eulogized the woman who died on the same day Noem’s grandmother did, 90-year-old Ardyce Apland: “Apland was just the sort of person a governor of whatever politics should eulogize. She had raised three kids on a family farm and they would remember being awakened by the smell of the lefse — Norwegian flatbread — that she baked on the pancake griddle. She worked for years as a secretary at the local Lutheran church and sang in the choir for nearly six decades.

“But to speak of Apland’s life is to risk talk of her death and COVID-19,” Daly added. “Noem continues to downplay the danger of the virus.”

He also continually returned to the 12 other people who died in the Estelline Nursing Home and the fact Kristi Noem refused to eulogize them, even though she wasn’t related to them.

Here’s how he closed the piece: “And on a day when Noem was both burying her grandmother and celebrating her 49th birthday, her office was asked if she had anything to say about the dozen other dead.

“She said nothing at all.”

Daly, by the way, has both long been on the Noem-bashing beat, calling her “COVID’s Cartoon Villain” in an October piece. In November, Daly attacked her for visiting Washington, D.C., during the second wave of the coronavirus, comparing her unfavorably to a certain Roman emperor by writing that “[a]t least Nero fiddled in Rome the whole time it burned.”

Are we supposed to be shocked and dismayed Noem’s office didn’t give Daly a quote when they found out he was writing what they likely deduced was another hit piece using the death of Noem’s grandmother as a springboard?

If you think I’m being flip, Daly is writing in a publication that speculated on the state of Andrew Cuomo’s nipples as the pandemic began. If you think it’s sobered up in the interim, here’s one of the outlet’s Friday headlines:

Gov. Noem is apparently evil because she didn’t acknowledge 12 people who died of COVID in her grandmother’s nursing home, but a California preacher who died of COVID merits a “Holy Moly.” Such are the current editorial standards at The Daily Beast, which are apparently not dissimilar from its fictional 1930s namesake.

Daly’s piece deliberately misled readers into thinking Noem’s grandmother died of coronavirus. It then muddied the waters by insinuating that even though she hadn’t tested positive for COVID-19 — well, we couldn’t really be sure she didn’t have it, could we?

Then, after ushering everyone past those facts with all due rapidity, Daly used his misleading insinuation to ascribe a lack of empathy to the governor because she didn’t eulogize Ardyce Apland or talk about the Norwegian flatbread the 90-year-old used to cook on the pancake griddle.

This is a disgusting cheap shot at a grieving family. Holy moly, indeed.

C. Douglas Golden, The Western Journal
15-Year-Old Hero Used an AR-15 to Protect His 12-Year-Old Sister from 2 Punk Burglers
Gen. Mark Milley's Insanely Arrogant 4-Paragraph Resignation Letter to Trump Is Released
Crazed Man Threatens to 'Shoot Up the Crowd', But Failed to Notice He Wasn't the Only One Armed
The Right Was Blamed for the Murder of 4 Muslim Men - Then the Suspect's Identity Was Revealed
Hunter Biden Arrives at Resort Island with Joe for Summer Vacation - He's Under DOJ Investigation
See more...
Advertisement