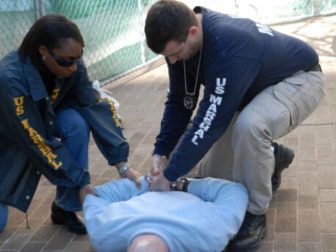 Nightmares are coming to an end for 45 missing children in Ohio after Operation Autumn Hope helped bring them home, according to the U.S. Marshals Service. A monthlong effort to […]

I have an admission to make: Even as a Second Amendment absolutist, I’m not what conservatives would refer to as “gunsy.”

It’s not that I have an impediment or a moral qualm with gun ownership. I think it’s profoundly moral to take your own security into your hands. Having covered firearm issues for some years now, I know enough. When my conservative friends start talking about whether they prefer American Eagle or PMC Bronze 115 grain 9mm ammo, I get that Charlie Brown teacher sound in my head.

I will say this, however: I know that I know more about guns than Joe Biden does.

Jeffrey C. Barton, unfortunately, didn’t come to this conclusion before he took the then-vice president’s advice.

So, before we get to the unfortunate case of Mr. Barton, let’s take two steps back in time. The first will be this Thursday, the second will be in 2013.

Trending:
'Borat' Mastermind Tried To Trick Trump Years Ago, But Donald Shut Him Down on Camera

On Thursday night, the Democratic nominee for president had one of those interminable town halls. I thought we were done with those, but then the second presidential debate was canceled due to the fact President Donald Trump didn’t want to do it remotely after his COVID-19 diagnosis.

I’ll admit I didn’t get to pay as much attention to these events as I would have liked to, particularly Biden’s. I have a newborn at home, a 2-week-old girl who’s more adorable than Biden and has more natural hair.

More importantly, while the prospect of Biden becoming president keeps me up at night metaphorically, my darling princess keeps me up at night literally. When you feel like your soul is shackled to a zombie’s body and you’re only awake thanks to an unnatural level of caffeine in your blood, new-baby cuteness and a zen-like acceptance of the foreknowledge you’ll next have a full night of natural sleep in about three months, the last thing you need is to watch a half-embalmed man stumble through a prearranged list of liberal platitudes, waiting for a “make sure you have the record player on at night”-level gaffe to get a jump on the next morning’s writing.

With my attention was thusly diverted, my takeaway from what I saw from the town halls was that Biden mostly got the usual softballs on ABC while Trump’s event on NBC went a little like this:

Want to put changing diapers into perspective? Have a child during the fever-months of a presidential race — provided, of course, you’re a Republican. It’s a reminder that life is never fair, but at least your baby is cute and you can clean up the mess.

Even the best softball player misses a pitch occasionally, however, and this is Joe Biden we’re talking about.

Asked about law enforcement reform, Biden gave a long and rambling answer with this gem somewhere in the middle: “You can ban chokeholds, but beyond that, you have to teach people how to de-escalate circumstances. De-escalate. So instead of anybody coming at you and the first thing you do is shoot to kill, you shoot them in the leg.”

At Reason, Robby Soave noted Biden had floated this idea of cops shooting people in the leg on a number of previous occasions, proving the former vice president was and remains spectacularly uninformed.

“Contrary to the former veep’s repeated assertions, neither the cops nor anyone else — except perhaps James Bond — could plan to shoot people in the leg as a matter of routine practice,” Soave wrote.

“It would take an expert marksman to accomplish that feat consistently. Unless a target is at close range, standing perfectly still, it’s very difficult to hit a specific location on the body. In reality, people are often moving during shootouts, which means that legs and arms can be the hardest part of the body to hit.”

It’s a reminder that Biden has a lot of bad advice when it comes to guns and how he thinks people can use them more responsibly — which brings us back to 2013.

In the wake of the 2012 Sandy Hook massacre, Biden told Americans they didn’t need AR-15-style rifles to protect themselves.

“If you want to protect yourself, get a double-barrel shotgun,” he said during the 2013 question-and-answer video on WhiteHouse.gov, according to Politico, in order to dissuade a woman from purchasing a rifle to protect herself. He said he had given his wife the same advice, too.

“I said, ‘Jill, if there’s ever a problem, just walk out on the balcony here, put that double-barrel shotgun and fire two blasts outside the house,'” he said.

“I promise you whoever’s coming in is not gonna.”

No, they weren’t, because he then lived in the official vice presidential residence at the Naval Observatory in Washington, which is heavily guarded by Secret Service. The shotgun would be supererogatory.

Also, it’s not great advice even if you aren’t in the Naval Observatory, as Barton found out.

The Vancouver, Washington, man was convicted in 2015 after he fired off shotgun blasts in the air to ward off men who were attempting to break into his vehicles.

According to The Columbian, Barton originally faced a misdemeanor charge of illegally discharging a firearm after the 2013 incident.

“I did what Joe Biden told me to do. I went outside and fired my shotgun in the air,” he said when he pleaded not guilty to the charge.

Officers, however, said discharging a weapon was only allowed in self-defense.

Barton was eventually convicted on a charge of obstructing a police officer, given that he didn’t follow police orders when they arrived.

Still, he was incensed that Biden gave advice on the official site of the White House that led to his arrest.

“While maintaining that he did nothing wrong, Barton said that Biden owes him an apology,” The Columbian reported in 2013. “Underneath a black jacket that Barton wore in the courtroom Tuesday, he wore a black T-shirt with the words ‘Joe Biden Owes Me’ written in white letters on the back.”

“He should really know the law before he starts giving America advice on national television,” Barton said.

He really should know how and when police are trained to respond to threats that require the use of a firearm, too, before saying that police reform involves trying to shoot criminals in the leg instead of anywhere that might be lethal.

Keep in mind the critique of Biden’s remarks comes from Reason, a libertarian publication that’s not known as a hive of uncritical love for law enforcement. Other Reason headlines from the town halls regarding law enforcement: “Biden Tries To Gloss Over His Long History of Supporting the Drug War and Draconian Criminal Penalties” and “If Trump Was Serious About Police Reform, He Would Have Addressed Qualified Immunity.”

Even one of Reason’s most eminent writers thinks this suggestion is stupid — which it is, but so is the general rule of government when it comes to restricting your right to own a weapon when liberals like Biden are in charge.

I may not be gunsy, but I know enough to know firing a shotgun in the air is a terrible substitute for an AR-15, particularly if the people you’re trying to scare off have firearms of their own. And if the cops come out to help you, they’ll just be aiming for the legs, so that’s a great help.

In the end, I came to the conclusion my 2-week-old girl is a better authority on guns than Biden. Sure, she can’t say anything about gun control or Second Amendment rights, but at least she’s never said anything that’s gotten a person arrested.

That’s got to count for something, no matter how much she needs to be burped.