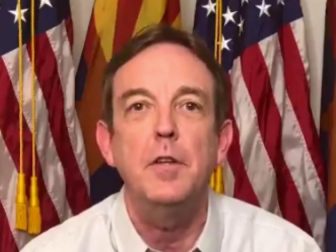 Black TikTok Star Slams Virtue-Signaling Alyssa Milano in Viral Video: 'You Are Everything You Preach Against'

Representatives from three liberal groups are calling on the Justice Department to send federal monitors to the Arizona Senate audit of Maricopa County’s 2020 election.

On April 23, the audit of the county’s 2.1 million ballots began in Phoenix despite an 11th-hour legal bid by the Arizona Democratic Party to put an injunction in place.

Democrats chose not to post a $1 million bond to cover the costs of halting the audit, which is being conducted by four companies and headed by Cyber Ninjas, contracted by the Arizona Senate.

On Wednesday, an Arizona judge declined to halt the audit based on allegations by the Arizona Democratic Party that Senate Republicans do not have proper procedures in place to ensure the security of the ballots.

Arizona election audit update: I am back in the coliseum under a new agreement for media, after a coalition of news organizations fought for better access. Updates to come for the next three hours. Will post soon! #azauditpool pic.twitter.com/8jNdVXkDpV

Democrats also called into question the independence of the companies conducting it.

On Thursday, the Brennan Center, Protect Democracy and The Leadership Conference sent a joint letter to DOJ’s Civil Rights Division calling for monitors to the audit location.

“We are very concerned that the auditors are engaged in ongoing and imminent violations of federal voting and election laws,” the letter reads, in part.

“Specifically, we believe that the senate and its agents, including Cyber Ninjas, are 1) violating their duty under federal law to retain and preserve ballots cast in a federal election, which are and have been in danger of being stolen, defaced, or irretrievably damaged, and 2) preparing to engage in conduct which will constitute unlawful voter intimidation in violation of the Voting Rights Act and other federal laws.”

The groups cited the auditors’ use of “ultraviolet light during inspection without gloves” as one way in which the ballots are not being preserved.

Additionally, they asserted the ballots are not being properly secured, citing KPHO-TV reporter Morgan Loew who tweeted that he gained “access to the #ArizonaAudit all week through open doors and wander[ed] around without being approached.”

At a Tuesday news conference, Senate audit liaison and former Arizona Secretary of State Ken Bennett refuted this charge, saying there is “24/7 armed security guarding the ballots,” which are kept in a locked corralled area at the Arizona Veterans Memorial Coliseum, where the audit is being conducted.

He further noted that there is 24/7 video live-streaming of the audit location, which included the ballot area.

Related:
Dem Sec State Who's Fighting AZ Audit Once Vowed to Use Her Office to Help Dems Take Over

The liberal groups also object to auditors’ plans to physically canvas to check if selected people voted. The group charged this would constitute voter intimidation in violation of the Voting Rights Act of 1965.

Arizona Republican chairwoman Kelli Ward responded to the letter in a video posted Friday saying, “This is an election audit, not an election.”

She added in a subsequent video, “Arizona is off-limits to the federal government trampling on our constitutional rights and our sovereignty.”

BREAKING NEWS… Major developments threaten America’s Audit in Arizona as Democrats ramp up efforts to undermine process. Watch Arizona GOP Chairwoman @kelliwardaz give the latest update. We Will #FinishTheAudit We Will Not Be Intimidated. pic.twitter.com/2dRWvxwdCH

Ward contended it is unconstitutional for the DOJ to be “horning in to pretend to monitor our audit with the goal of interfering with the Arizona Senate’s right to audit an election, which has been upheld by the Arizona Supreme Court.”

A news release from the Arizona Senate Republicans in late March said the audit will include scanning all 2.1 million paper ballots cast to look for irregularities, conducting a full manual recount, investigating the registration rolls and performing a forensic audit of the electronic voting machines and systems used.

President Joe Biden won Arizona by 10,457 votes (0.3 percent), the closest margin of any of the swing states that went for him.

In contrast to the numerous GOP leaders who are all talk and no action, Florida Gov. Ron DeSantis made a bold, pre-emptive move to block Big Tech censorship of conservative […]

Not everyone gets the chance to reflect on their life as it comes to an end and have one final wish granted, but one man in Australia recently had the […]

Op-Ed: On Thursday's National Day of Prayer, We Should Remember the Words of Abraham Lincoln

Last year, the annual National Day of Prayer was marked by the early stages of the coronavirus pandemic. Across the country, many turned to prayer out of fear, others out […]

Well, last weekend was May Day, and you know what this means! Flowers, sunshine, maypoles and anarchy, apparently. At least, this was the case in the Pacific Northwest over the […]

As mysterious attacks on Americans continue, one former Trump administration official said responding to the issue must be an urgent priority of the new administration. The so-called directed energy attacks […]

Like a child throwing a temper tantrum, Black Lives Matter has once again updated its list of demands to the United States of America. As the organization seemingly tears itself […]

Olympic Committee Stands Against Kneelers, Says No Way to BLM

Athletes have been prohibited from wearing clothing that features the “Black Lives Matter” slogan at the Tokyo Olympic Games, which are scheduled to begin in July, according to the International […]