Democrats are losing their collective minds over the confirmation of Amy Coney Barrett to the United States Supreme Court. They just can’t handle the fact that, as the party out […]

A new study released Wednesday found that the novel coronavirus may have mutated to get around interventions such as mask-wearing.

Scientists in Houston studied over 5,000 genetic sequences of SARS-CoV-2 but did not find that the mutations have made the virus deadlier or changed clinical outcomes, The Washington Post reported.

David Morens, a virologist at the National Institute of Allergy and Infectious Diseases, reviewed the study and said it suggests the virus has become more transmissible and could “have implications for our ability to control it.”

“Wearing masks, washing our hands, all those things are barriers to transmissibility, or contagion,” Morens said.

“But as the virus becomes more contagious it statistically is better at getting around those barriers.”

He added that “you don’t want to over-interpret” the study’s implications.

Study author James Musser of Houston Methodist Hospital said that due to the widespread transmission of the virus across the country, it has had many opportunities to change as it replicates.

“We have given this virus a lot of chances,” he told The Post.

“There is a huge population size out there right now.”

Compared to other viruses, such as HIV, SARS-CoV-2 has mutated more slowly as it spreads, Nature reported.

However, researchers have cataloged over 12,000 mutations of the virus’ genomes.

The mutation tracked in the new study, which has not yet been peer-reviewed, could have implications on any vaccine formulated to fight COVID-19.

“Although we don’t know yet, it is well within the realm of possibility that this coronavirus, when our population-level immunity gets high enough, this coronavirus will find a way to get around our immunity,” Morens said.

“If that happened, we’d be in the same situation as with flu. We’ll have to chase the virus and, as it mutates, we’ll have to tinker with our vaccine.”

The researchers found that during Houston’s second wave of coronavirus, over 99 percent of samples contained the D614G mutation, which refers to the substitution of an amino acid called aspartic acid for one called glycine, possibly giving the virus a biological advantage as it spreads.

In response to critics saying the research “just confirms what has already been described,” Musser said that his conclusion that the mutation makes the virus better adapted to spreading among humans does not mean the case is closed on the matter.

“This isn’t a murder trial,” Musser said. “We’re not looking for beyond a reasonable doubt.

“This is a civil trial, and clearly, it’s the preponderance of the evidence that I think forces all of us into the same conclusion, which is there’s something biologically different about that strain, that family of strains.” 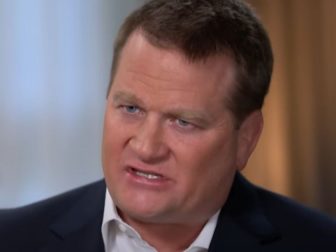 Watch Bobulinski Interview: Biden Rep Told Me I Would 'Bury Them' if I Told What I Knew

Tony Bobulinski, a former business associate of Hunter Biden, told Tucker Carlson during an interview Wednesday he was warned he could potentially “bury” everyone involved in the Biden family’s reported […]

The Justice Department has charged eight people with allegedly conspiring to operate inside the U.S. as agents of the Chinese government while attempting to intimidate U.S. residents into returning to […]

Egyptian President Abdel-Fattah el-Sisi, responding to a display of images in France of the Prophet Muhammad, said Wednesday that freedom of expression should stop if it offends the world’s population […]

Democratic presidential candidate Joe Biden is running television and radio ads touting his faith, trying to convince Christian voters of his devout faith to solicit their votes, but the facts […]