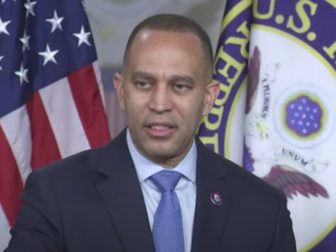 This article was sponsored by Students for Life of America.

Tens of thousands of Americans descended on Washington, D.C., on Friday for the 2022 March for Life with renewed optimism amidst what many people hope are the waning days of Roe v. Wade as we know it.

According to The New York Times, the march was largely centered around December oral arguments from conservative justices on the U.S. Supreme Court that signaled a willingness to uphold a Mississippi law banning abortion after 15 weeks.

The Times reported “several” of the six conservative justices on the court seemed willing to not only uphold that law, but also overturn the Roe v. Wade decision that requires states to provide abortion access until the fetus is capable of living outside the womb.

“We are hoping and praying that this year, 2022, will bring a historic change for life,” March for Life Defense and Education Fund president Jeanne Mancini said, according to the Times.

One of the many pro-life groups in attendance on Friday was Students for Life, an organization dedicated to training college students in pro-life philosophies. You can learn more about Students for Life and the Final Fight for Freedom here.

On its official Twitter account, Students for Life posted a timelapse video of the March for Life event and estimated about 150,000 people attended the event.

“The cold couldn’t dampen the spirits of the Pro-Life Generation who knew we were celebrating the last anniversary of Roe v. Wade,” the organization wrote. “The largest human rights march in the world IS against abortion.”

Watch the FULL timelapse of the ’22 #MarchforLife! We estimate ~150,000 people. The cold couldn’t dampen the spirits of the Pro-Life Generation who knew we were celebrating the last anniversary of Roe v. Wade. The largest human rights march in the world IS against abortion. pic.twitter.com/ovVfXCxZpK

The theme of the march was “equality begins in the womb,” the Times reported. While leftists pretend to care about equality in partnering with activist organizations like Black Lives Matter, Students for Life is dedicated to fighting for true freedom for the most vulnerable among us, and you can join the fight today.

According to the Times, Catholic priest and podcast host Rev. Mike Schmitz sent the pro-life generation on its march to Capitol Hill and encouraged them to remember, “Every child matters, every woman matters, every person matters.”

Following the March for Life, Students for Life hosted its National Pro-Life Summit in Washington, D.C. Former Vice President Mike Pence spoke at the event and made his position on Roe v. Wade explicitly clear, the organization reported on its website.

Students for Life president Kristan Hawkins opened the summit herself with a powerful argument against abortion.

“Abortion advocates want to claim that they are defending freedom of choice — what we call violence, they call a ‘woman’s right to choose,'” Hawkins said. “But no one has a right to choose death for another innocent human being.”

Hawkins added that the Final Fight for Freedom is about protecting American rights not just for unborn children, but for every American.

“The Founders understood that freedom can only survive within the constraints of justice,” Hawkins said. “If a king, slaveholder, or even an abortion facility …. can take away a person’s life at will, then no one’s rights are truly secure.”

The weekend’s events were a powerful message to the pro-abortion crowd that their lies are being exposed, and the pro-life generation will not be silenced. Join Students for Life and the Final Fight for Freedom today by following this link.