DeSantis Fires Warning Shot at Woke Doctors: You Will Lose Your License

The city with a well-earned reputation for ludicrously progressive politics, and well-earned contempt from the country’s conservatives, delivered a resounding blow to the American left in recall elections Tuesday that kicked three members of the city’s school board out of their jobs.

And if the numbers are any sign of just how sick American voters are of liberal politics, November’s midterms are going to be miserable for the left in the rest of the country.

According to results from the Department of Elections for the city and county of San Francisco, voters approved recalling the three by landslide results.

Board member Alison Collins was recalled by more than 78 percent of the vote; board president Gabriela Lopez by almost 75 percent; and board member Faauuga Moliga by 72 percent.

Trending:
Kari Lake Holds Electric 'Save Arizona' Rally with 4x Capacity Trying to Get In - Even Trump Called In

Those are blowout numbers — in polling that, according to the elections department, drew just over 25 percent of eligible voters.

And they’re a sign that — even in San Francisco — voters want their government focused on more important issues than leftist priorities such as renaming schools because past figures — including Abraham Lincoln and George Washington — don’t live up to current standards of leftist morality.

They’re also a sign that parents care, passionately, about their children’s education, even if the progressives in charge of the education establishment don’t.

BREAKING: Parents in San Francisco have voted to recall three radical left-wing members of the city school board by a wide margin.

The lesson is clear: Don’t piss off parents. pic.twitter.com/FT2cuaibst

As The Associated Press reported:

“Parents in the politically liberal city launched the recall effort in January 2021 out of frustration over the slow reopening of district schools, while the board pursued the renaming of 44 school sites and the elimination of competitive admissions at the elite Lowell High School.”

One of the key people behind the recall said the message was clear.

“The city of San Francisco has risen up and said this is not acceptable to put our kids last,” said Siva Raj, one of the organizers of the recall, according to the AP. “Talk is not going to educate our children, it’s action. It’s not about symbolic action, it’s not about changing the name on a school, it is about helping kids inside the school building read and learn math.”

The board’s performance was so bad that the recall effort was supported in a November Facebook post by San Francisco Mayor London Breed, who actually appointed one of the ousted members — Moliga — to the job in 2018. According to the AP, Collins, Lopez and Moliga were the only three members of the seven-member board who were eligible to be recalled.

Given the results of Tuesday’s vote, the whole board might have been recalled if it could have been.

Of course, a school board election — even in a liberal bastion like San Francisco — isn’t normally a harbinger of national politics.

And one of the ousted members in particular, Collins, had problems when, as Fox News reported in March, tweets resurfaced from December 2016 in which she criticized Asian-Americans as “house n*****s” for not being vocal enough in opposition to then-President-elect Donald Trump. That kind of language will get even a black woman in trouble in a city with a large Asian-American population.

But national politics in the pandemic year of 2022 is anything but normal. 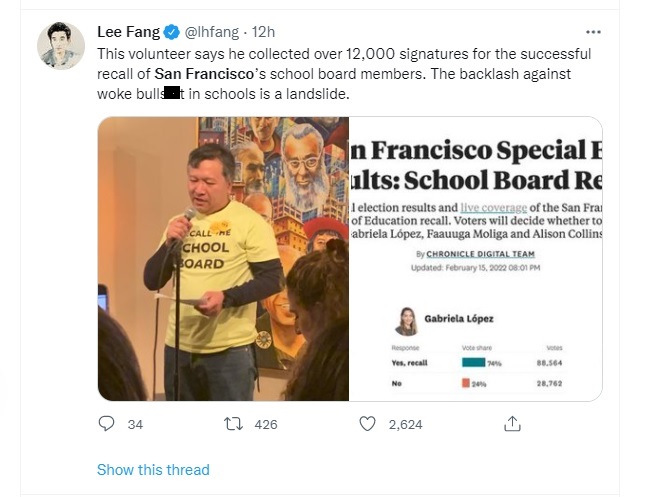 The Democratic Party that controls both houses of Congress and the White House has been demonstrating since the inauguration of the doddering, almost certainly corrupt President Joe Biden that its priorities are completely out of line with those of normal Americans — just like the school board members in San Francisco.

With the country enduring the highest inflation in decades, steadily rising gas prices (just over $3.50 a gallon nationally, according to AAA, and much higher in many states) and an invasion of illegal immigration that’s been actively fostered by the Biden administration, Americans don’t have a government that’s working for them.

Instead, voters are seeing a governing party obsessed with identity politics and “green” energy policies that have wrecked energy production and destroyed jobs (starting with Biden’s Day One cancellation of the Keystone XL pipeline) and oblivious to day-to-day concerns.

And as the election of Virginia Republican Gov. Glenn Youngkin in November showed, education is very much a part of the day-to-day concerns of American families — and no sane person who’s followed the news over the past two years can believe Democratic Party leaders care nearly as much about education as they do about the leftist interest groups that run it, such as teachers unions.

Considering the ousted board members’ replacements are going to be appointed by Breed, who is herself a leftist Democrat, it’s not likely that the ideological outlook of the San Francisco school board is going to be changed by this vote.

But the vote itself — and the landslide numbers involved — show that there could be a major change brewing in the American electorate that doesn’t bode well for the Democratic Party.

If every Republican, conservative and independent voter turns out for the midterm elections, the United States will be in a fair position to start righting the wrong of the 2020 election that installed an inept president and rapacious Congress into positions of power.

Even sensible Democrats can come on board, too.

If sanity is possible in San Francisco — and this throw-the-bums-out vote showed it is — it’s possible anywhere. And that should make Democrats miserable.

Joe Saunders, The Western Journal
'I Don't Give a F*** If You're an Adult or Not': 9th-Grade Female Student Physically Beats Teacher
Hunter Biden Allegedly Withheld Money from Employee Until She Preformed Sexual Acts
Lowe's Attempts to Thwart Rampant Theft by Developing High-Tech System That's 'Invisible' to Customers
Police Officer Dies Suddenly While on Duty 'Serving the Community He So Loved'
Is an American Revival Coming? A New Study Gives Christian Leaders Hope for Next Generations
See more...
Advertisement

'I Don't Give a F*** If You're an Adult or Not': 9th-Grade Female Student Physically Beats Teacher

Viral videos of a student beating up her teacher as her classmates gleefully laugh encapsulate the tragic descent of American schools.
By Samantha Chang, The Western Journal  January 31, 2023

A new report outlines what Hunter Biden asked a female assistant to do when she said her back pay had not appeared.
By Jack Davis, The Western Journal  January 31, 2023

Lowe's is taking a high-tech approach as it tries to curb rampant retail theft through an idea called Project Unlock.
By Jack Davis, The Western Journal  January 31, 2023

A Georgia police officer passed away while chasing a suspect who fled after a traffic stop.
By Jack Davis, The Western Journal  January 31, 2023

Is an American Revival Coming? A New Study Gives Christian Leaders Hope for Next Generations

Even though the number of practicing Christians declined, trends show a promising opportunity for the younger generations.
By Richard Bledsoe, The Western Journal  January 31, 2023

Arizona's election warfare may be taking a drastic turn, with the Democratic secretary of state calling for an investigation of Kari Lake.
By John McCann, The Western Journal  January 31, 2023

US Corn Farmers Sound the Alarm: Most Catastrophic Problem Ever Faced Headed for Crop

Mexico's new law regarding American imports of corn could spell disaster for American farmers and the economy.
By Peter Partoll, The Western Journal  January 31, 2023

The sunshine of the Sunshine State continues to enter the nooks and crannies of higher education. Zombies beware!
By Mike Landry, The Western Journal  January 31, 2023
Next